The expertise and experience of podiatrist Dr. David Gannon, usually only found at a large medical institutions, in a local comfortable setting. 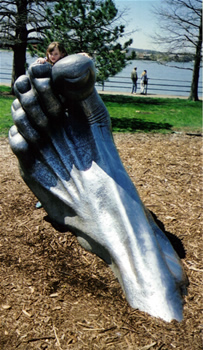 Dr. Gannon was born and raised in New Jersey graduating from Bayonne High School in 1987 with honors. He was active in soccer playing for his school, club teams, and the New Jersey state select team. Dr. Gannon later attended Drew University in Madison, N.J. and graduated in 1991 with a BA in Biology. While at Drew he played men’s soccer, became a certified emergency medical technician, and worked part time for an emergency ambulance service. In 1992, he became a certified mobile intensive care unit paramedic and then worked at the Jersey City Medical Center while attending the New York College of Podiatric Medicine.

Dr. Gannon graduated from medical school in 1996 with honors. He was on the Dean’s List for four consecutive years and was the recipient of the NYCPM Trustee Scholarship from 1993 through 1996. He received certificates of achievement in lower extremity anatomy, pathology, neuroscience, bacteriology, cell biology/histology, and physiology. On 5-22-96, he was given a special recognition award from the Jersey City Fire Department for being instrumental in saving the life of a firefighter. He had also been recognized by the Jersey City Medical Center for his excellence in patient care. Dr. Gannon is SSI Scuba / Scuba Rescue Certified.

Dr. Gannon completed his first year of residency in 1997 at the Wyckoff Heights Medical Center in Brooklyn, N.Y. fulfilling all the medical training required of a rotating podiatric resident. He was then selected to train in Baltimore, MD at the former Liberty Medical Center completing the first twelve months of his surgical residency in 1998. The Liberty program merged and became the University of Maryland / Mercy Medical Center program where Dr. Gannon completed his surgical training in 2000. During this time, Dr. Gannon served as chief resident and was selected for a fellowship under a renowned orthopedic foot and ankle surgeon where he received extensive training in rearfoot and ankle surgery.

Dr. Gannon remained in Baltimore after residency and was asked to become a teaching physician in order to train future residents at the University of Maryland / Mercy Medical Center’s residency program. Dr. Gannon has been in private practice since 2000 and has worked at the Johns Hopkins Hospital treating patients and performing surgery. He has specialized training in ankle arthroscopy, lower extremity external fixation, skin grafts/flaps, and extracorporeal shock wave therapy.